1. abura soba
the creamy, slippery, spicy empress of all japanese noodles. go to the hiroo or shibuya branch, follow these elaborate mixing and saucing instructions, and watch your world forever changed.

order: karamiso (spicy) with a side of toppings. add a swirl of the red bottle, a swirl of the white bottle, mix, swoon. add in onions halfway through if feeling feisty.
​
multiple locations, nearest stations: hiroo, shibuya 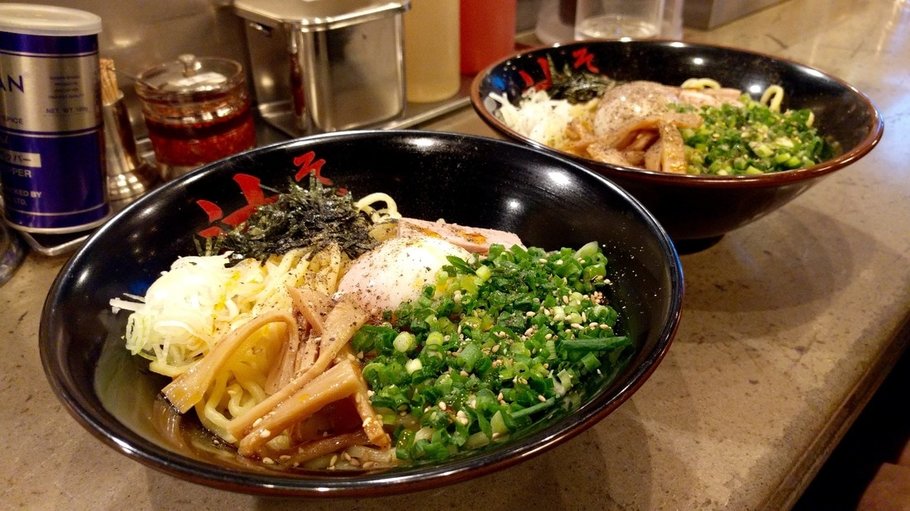 namaiki is roughly half the price of yoroniku (probably due to its location in slightly more rando akihabara), and will sometimes offer specials that yoroniku doesn't, like this truffled melting beef egg package dropped straight from heaven onto our tables.
​ 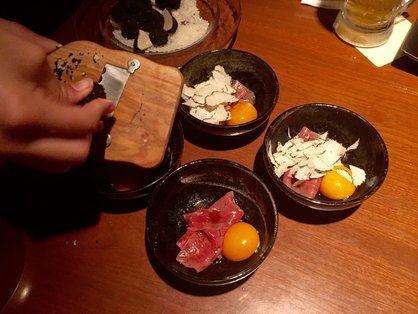 ​[*disclaimer: this MAY have been a seasonal specialty over the summer. but even if they don't still have this, the rest will be worth it.]
and god blessed them, and god said unto them, put marbled raw japanese beef on top of rice and make beef sushi. 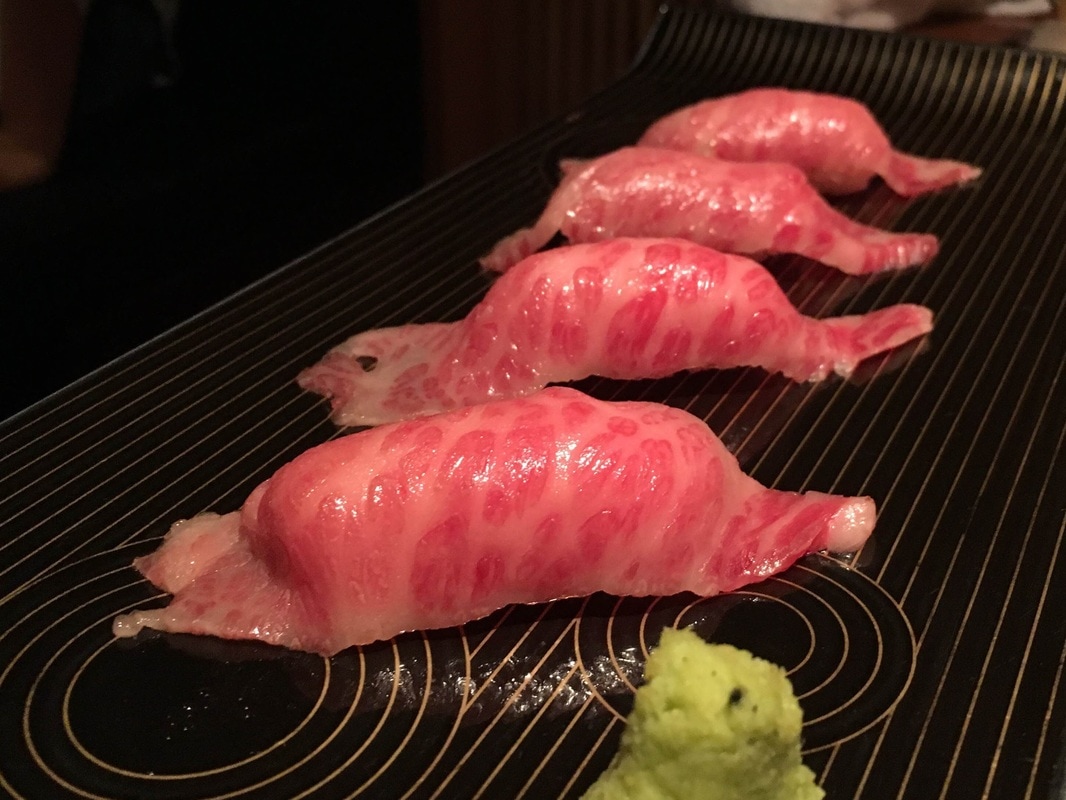 ​order: any of the course menus. if they offer truffle additions, DO IT.

nearest station to namaiki: akihabara
nearest station to yoroniku: omotesando
​3. fuunji
disclaimer: below photo was taken from a previous facebook post of mine, since the phone i took it with is now broken.
​this is why it looks like it was taken with a potato.
order: tokusei tsukemen (特製つけめん), which comes with all the trimmings
nearest station: shinjuku
4. lés creations de narisawa
​$$$$$, but i've found no restaurant on earth (so far!) to top narisawa. not so much a restaurant as a spiritual ayahuasca-esque journey which will have you questioning why your life path has not resulted in narisawa-san living in your kitchen and cooking for you daily.
​

the menu changes seasonally, but when last there, this was brought out to show us what went into the the sea-snake 'essence' soup. dan's tasting notes describe the soup's flavor best: "acrid, liquid evil, malevolent... implacable malice... cannot be diverted, cannot be bargained with. almost like licking a razor wire." 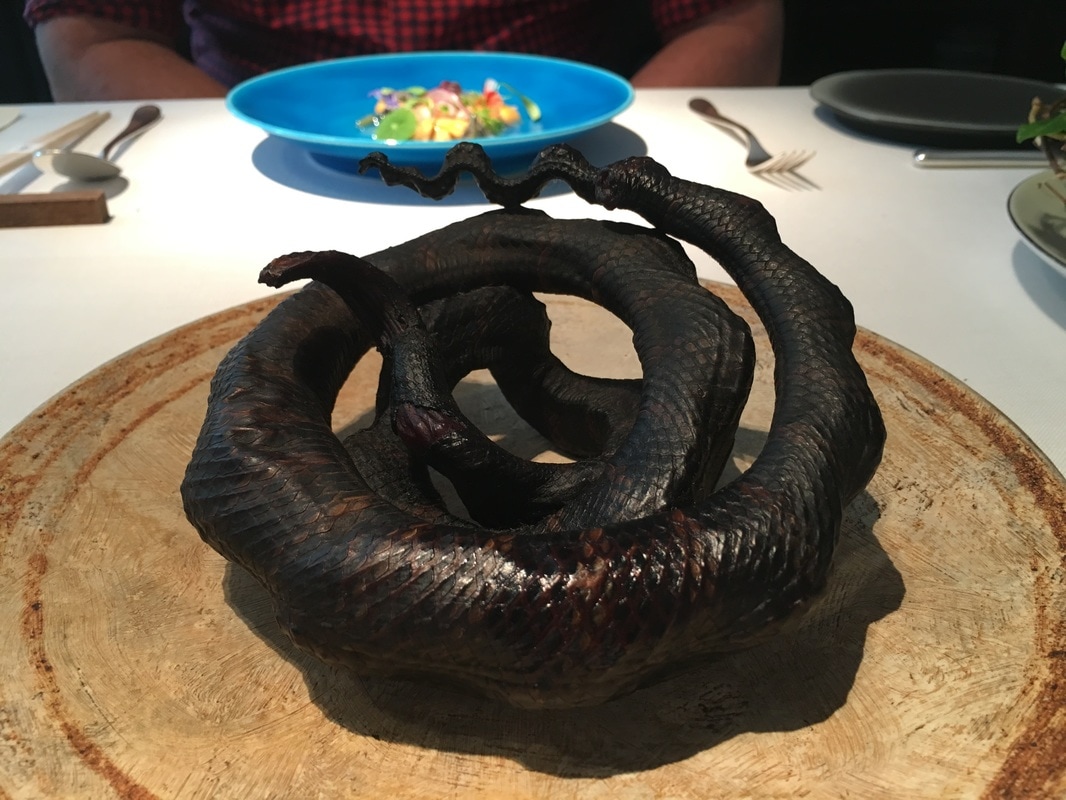 book WELL in advance, through their website or your hotel concierge. apparently you can sometimes get last-minute reservations through govoyagin.

order: you will have no choice, and you will love it 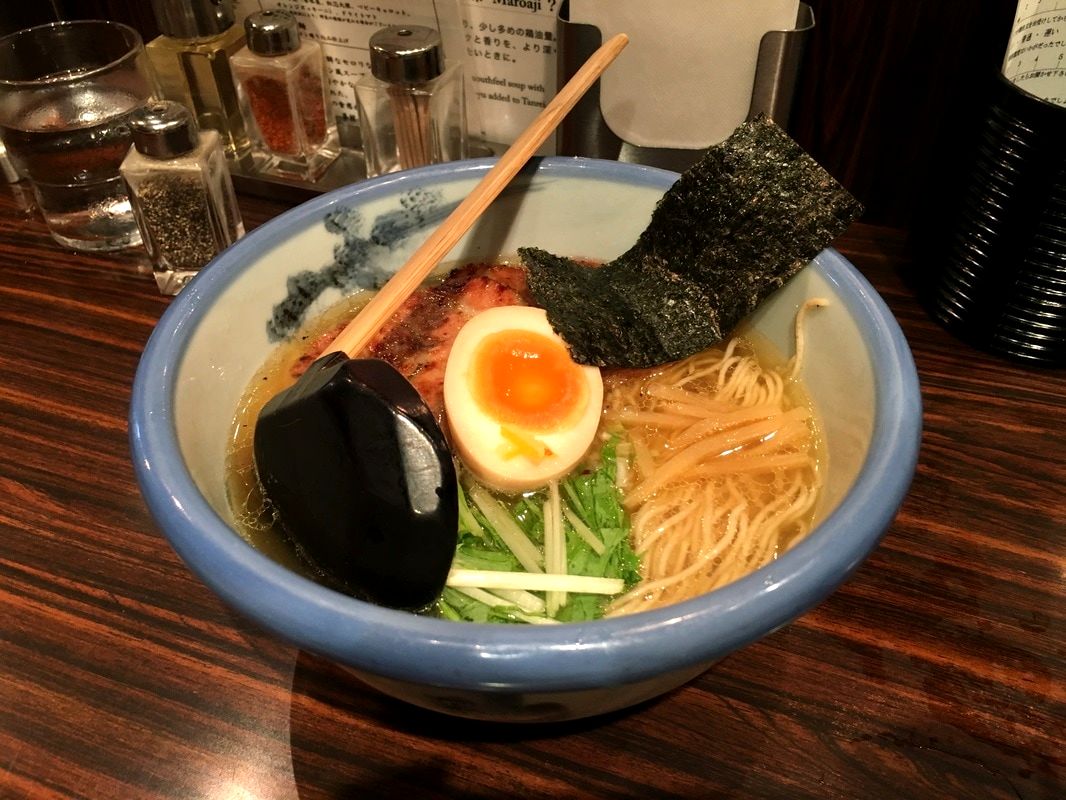 multiple locations - type 'afuri' into gmaps to see. nearest stations: nakameguro (for the most charming branch - can walk by the river after), roppongi (there's a v good branch right in the basement of roppongi hills/roppongi hibiya line station), ebisu, azabu-juban
​
​6. butagumi 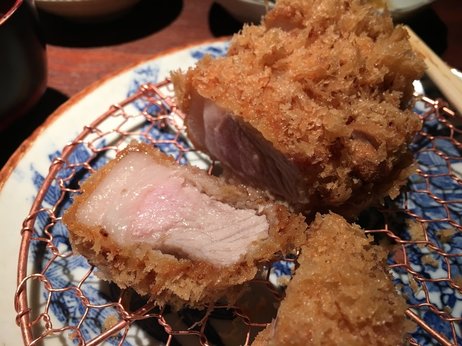 some like it lean, some like it fat. but whichever way you like it, butagumi (@nishi-azabu location) is fantastic, even for non-tonkatsu (deep-friend, breaded pork cutlet) lovers like me. bonus points for being easy to reserve and foreigner-friendly.

order: any of the ro-su options (super fatty roast), or lean pork if preferred; any of the excellent appetizers

nearest station: roppongi, hiroo (sort of in between both - 15-min-ish walk away from either)
​
​7. kagari 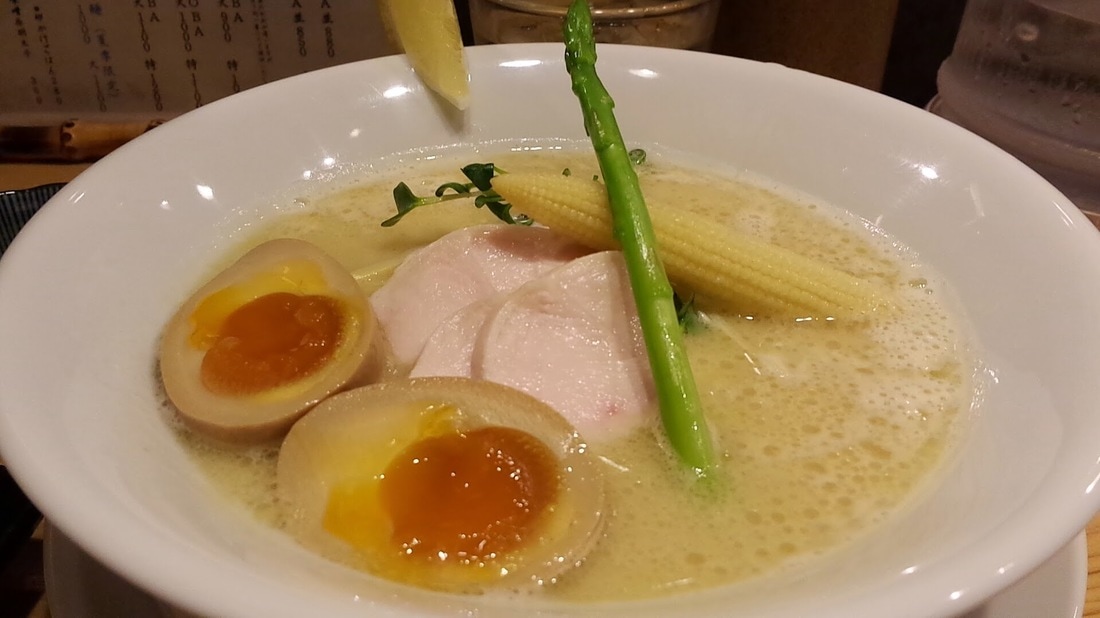 milky chicken broth so thick that asparagus could almost stand up on its own. delicate ramen lying coiled beneath like the most delicious loch ness monster. dangerously rich and silky - best for cool, rainy days or cold nights.

order: tori paitan soba, and get there on the early side to do it (nothing like getting towards the front of the line and being told they've just run out. but if this tragic fate befalls you, run to oborozuki nearby to drown your sorrows in fabulous tsukemen)

nearest station: ginza
​8. BATTLE OF THE SUSHI JOINTS [see below for which fits your profile]
​
FOR THOSE LIVING IN JAPAN WHO JUST WANT DELICIOUS, EASY SUSHI WITHOUT WAITING AN HOUR OR RESERVING THREE WEEKS IN ADVANCE
​ 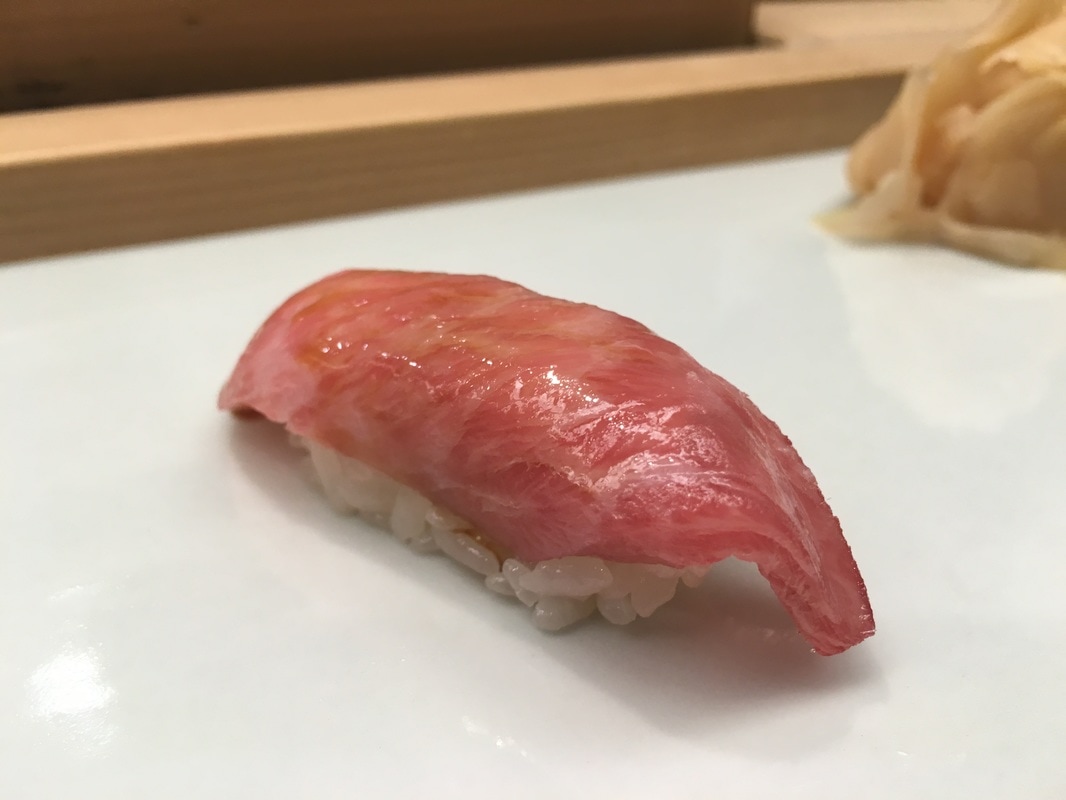 little toro: to me, you are perfect. and pretty enough to merit two pictures.

​you have no bad angle. you are the candice swanepoel of sushi.

lightly yuzu-dusted anago (saltwater eel - softer and more delicate than the oilier, bolder unagi, freshwater eel).
​
disclaimer: when we first stopped by, this was the best anago i'd ever eaten period. when we next stopped by, it was slightly less mindblowing. proceed with caution, but with anticipation of potentially the best anago you will ever eat. 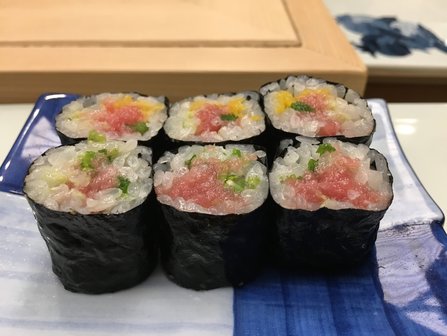 ​​​don't forget the negi-toro (smashed fatty tuna and scallion rolls, laced with wasabi).
order: whatever your sushi standbys happen to be. for me: chuu-toro, oo-toro, ikura, anago, negi-toro. this review for their roppongi branch details more dishes 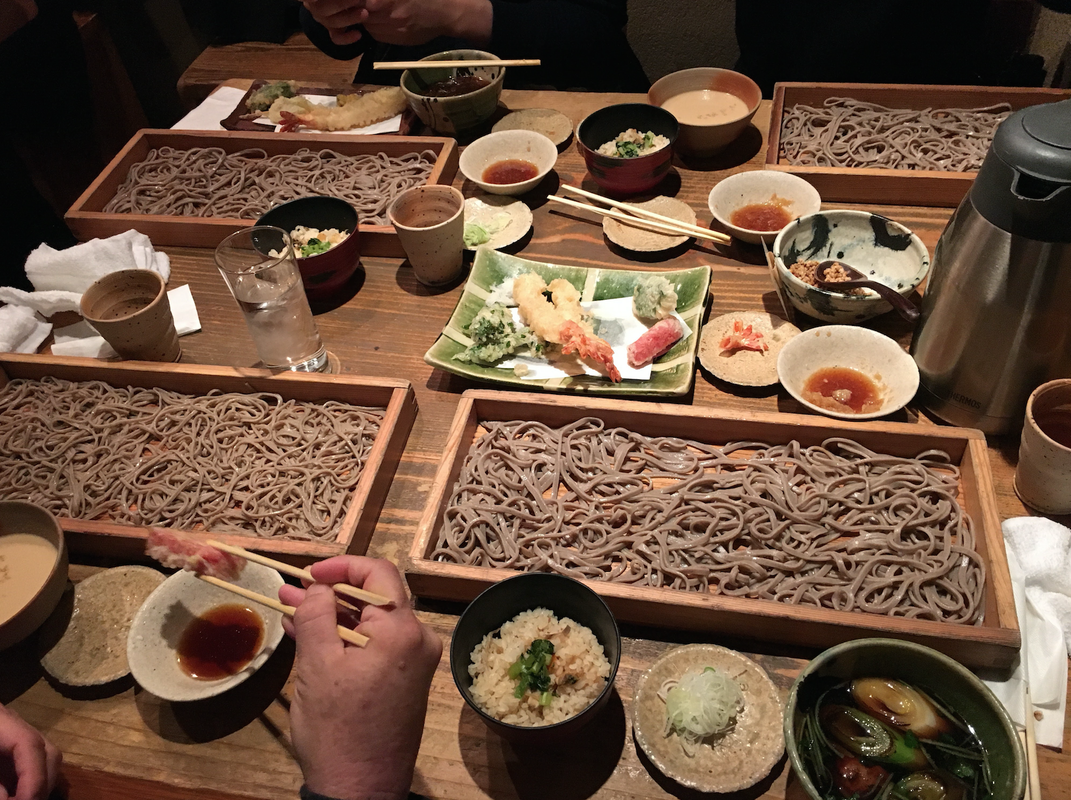 order: literally anything is good, but duck broth soba, tempura, tamagoyaki
nearest station: ebisu
​
​10. GASP! non-japanese food: baked goods galore
​
here are any number of spots which could've rounded off this list. the delightful ukyo 200 sakes, a sake bar tucked away in sweet azabu-juban which serves up fabulous little plates heaped with uni, jewel-like ikura (roe), and truffled potato salad; sasano, a wonderful though pricey izakaya hidden away in the heart of roppongi, where crisp croquettes ooze with creamy crab and refreshing seasonal salads offset fresh fish caught right in front of you; and even the much-vaunted aronia de takazawa and ryugin, though they don’t (in this writer’s humble opinion) hold a candle or even a drop of candlewax to narisawa (above).

but if there’s one thing japan does really, really, really well (in addition to the other millions of things it does really, really, really well), it’s baked goods. thick-cut, milk-rich shokupan (fluffy, square white loaves) from virtually any bakery; impossibly light croissants encased in the most golden-crisp shell, with buttery dough that stretches out yearningly as you pull off a piece.
i once went on a croissant hunt through paris, trying all the winners of some croissant competition - none of them could beat japan’s croissants. lest this come across as blasphemy, just know that david chang agrees -

“Let me rattle off the reasons why Tokyo beats all other cities… I’d argue that some of the best French food and some of the best Italian food is in Tokyo. All the great French chefs have outposts there… The Japanese have been sending their best cooks to train in Europe for almost sixty years. If you look at the top kitchens around the world, there is at least one Japanese cook in nearly every one… Japan has taken from everywhere, because that’s what Japanese culture does: they take and they polish and shine and they make it better. The rest of the world’s food cultures could disappear, and as long as Tokyo remains, everything will be okay…  They have the best fucking patisseries in the world. The best Pierre Hermé is in Tokyo, not in fucking Paris.  You know why? Because of the fucking Japanese cooks.”

​- David Chang, “Why Tokyo is the World’s Best Food City”​ 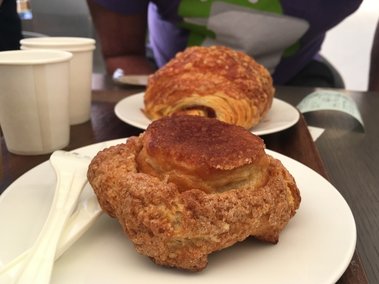 ​and though it may not technically qualify as a “baked good”, clinton street bakery’s famed pancakes are MUCH better in tokyo than in their original home of new york.​
below: scenes from the exquisite le petit mec in shinjuku (pain au fromage money shot at left).
​
​hit up gontran cherrier, too (branches in shibuya and shinjuku) for their massive glistening butterballs of croissants - perfect sliced in half at home and stuffed with oozing brie and thin ribbons of japanese ham, then toasted.
​BONUS MENTIONS FOR VISITORS 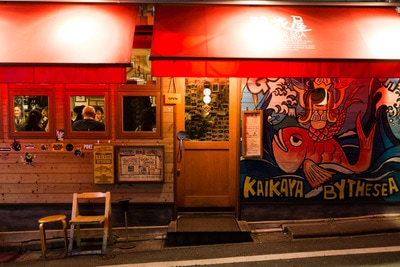 caters happily to foreigners with great, boisterous service and delicious excellent-value (~$35) seafood course menus. a little TOO foreigner-friendly for many residents, bordering on touristy; but for visitors, you'd be hard-pressed to beat this for a casual dinner in terms of location, ease (english menus!), and value for yumminess. perfect for meeting for dinner before going out in shibuya. 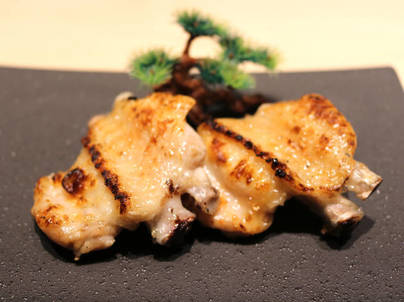 creative, modern course menu full of yakitori (grilled chicken skewers) and a seemingly endless parade of other delicious grilled things on sticks, for a price that feels way lower than it should be (~$48 USD). ask for the private room, dark and sleek, which seats around four people.

order: course menu
nearest station: nakameguro
​
photo credit: Time Out Japan
​go forth and gochisousama!*
​👆*what you say to the chef/staff after each delicious meal👆
​
​
Comment Form is loading comments...